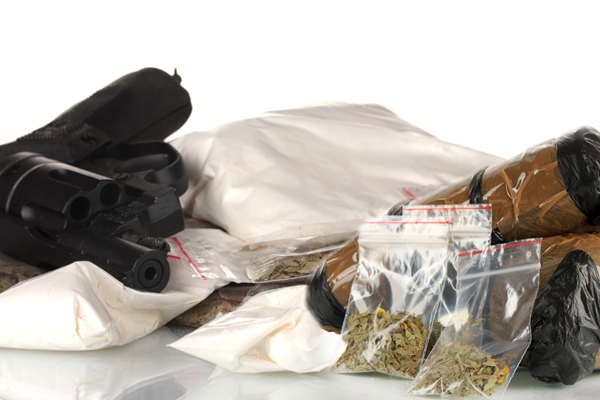 Manufacturing crimes in Utah, with methamphetamines occurring in rural inland of Utah, are abundant. A somewhat complicated term, “manufacturing” is defined as the production, preparation, propagation, compounding, cultivation, growing, conversion, or processing of a dangerous drug. All these substances are exacted naturally, or by chemical synthesis, or by a mix of both. Manufacturing charges often arise when law enforcement receives a tip that someone is manufacturing or growing an illegal drug in a property or home. Law enforcement then takes comprehensive measures before a bust, doing a background review on the criminal history of the home or property and check for a past history of drug charges, establish surveillance, and check electric bills and trash bins for drug paraphernalia. If police believes that there is plausible cause for a warrant, a search warrant is created and presented to a judge.

A drug manufacturing crime in Utah is quite tough, and depending on the circumstances of the case, you might be accused of a Class II or III felony. The Utah Controlled Substances Act (UCC 58-37-8) prohibits the production,manufacturing, dispensing, or possession with intent to dispense illegal drugs. Schedule I or Schedule II substances like cocaine and heroin carries a potential sentence of up to 15 years in prison and $10,000 in fines as it is considered a second degree felony. This type of charge can be elevated to a first degree felony which carries $10,000 in fines and 5 years to life imprisonment. Aside from significant prison time and fines, an offender can have their property seized.

Manufacturing charges are increased to the next level, felony charges, under particular circumstances such as adjacency to academic institutions, churches, public housing, infant care establishments, parks, community facilities, universities and even adult assisted living quarters. Furthermore, there are extra charges that are commonly filed in these situations if the property used was owned, leased, rented, or possessed for manufacturing (or cultivating) an illegal drug. These charges not only apply to a person who was renting a house for manufacturing, but also to the owner of the property that knowingly rented it to a person for manufacturing a controlled substance.

Drug manufacturing for particular drugs like methamphetamine and marijuana has emerged as something of an epidemic in Utah, and accordingly, law enforcement has intensified their operation to handle it. They are so aggressive that, in some instances, they don’t follow their own legal procedures in search and seizure or in the process of arrests. A competent drug crime attorney can help identify whether the police officer breached your rights, then demand that the evidence be deemed inadmissible and the charges dropped entirely or reduced once proof has been established.

To become convicted of manufacturing (or intending to manufacture) illegal drugs, district prosecutors must basically prove the elements of both possession and an intent to manufacture. A permit or authorization to own particular items otherwise used to make controlled substances may be a defense. For instance, pharmacists have access to a wide array of substances that may be used to manufacture illicit drugs. Certain chemicals and industrial supplies normally used to make illegal drugs may also have legitimate uses that would require a permit.

When charged with manufacturing crimes in Utah it is highly important to get the best legal representation to challenge and defend your case.