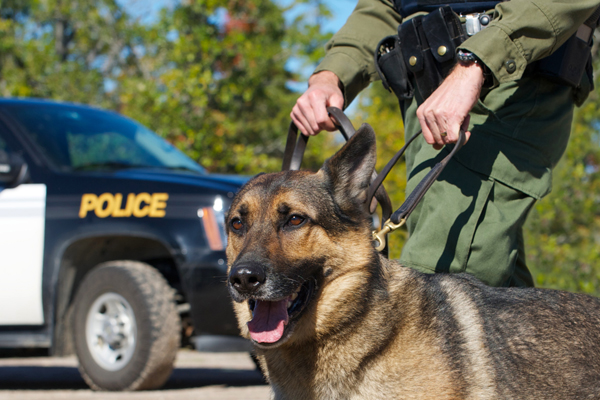 Have your rights and privacy been breached because of questionable canine drug searches? Are you not certain of your rights when it comes to a canine search of your home or automobile? Even for citizens who know their rights, the laws on drug dog searches can be perplexing. For example, did you know that a canine sniffing the exterior of your vehicle in NOT considered a search? The U.S. Supreme Court established that the scent of drugs wafting from your motor vehicle are in the public space. It used to be that the police needed to get an “articulable suspicion” in order to get their canine up to your car. However, in 2005, in Illinois v. Caballes, the U.S. Supreme Court ruled that the police required no such articulable suspicion to call upon a police dog to your car during a traffic stop. So if the police officer is writing you a ticket for damaged tail light, he or she can have the drug dog right up beside the car (but not inside). If the dog suggests that it sniffs drugs, the police may then look over your motor vehicle.

Common misunderstandings about the laws of compliance as they pertain to canine drug searches can result to human rights violation. For instance, the law does permit a canine to come with an officer on a routine traffic stop, but it is illegal for that policeman to prolong the traffic stop unnecessarily while the dog searches. Moreover, if your traffic violation ticket has already been created, a police officer can not order you to keep your vehicle on the side of the road while you wait for the drug dog to arrive.

These are just some of the laws involved when dealing with an uncalled-for canine search. Even the drug dog itself is generally not met with very much dependability by a judge. Due to the prevalence of cocaine and marijuana in our society, trace amounts of these drugs can be found all over, especially on paper currency. It is not uncommon for a drug dog to “alert” on a car only to discover money.

Sadly, cops do not regularly observe these regulations as they should and as a result, suspects end up having their rights violated. In cases where police officials perform illegal searches, it is commonly possible for defendants to have evidence dismissed from trial. In these kinds of cases, defendants in drug cases work with a seasoned attorney to look into the police services that led to the charges against them.